Sixteen teams have forged a path to a playoff berth. The marathon regular season revealed important strengths and weaknesses that, if carefully parsed, can help project which teams are headed for a deep run and which are set to falter. Here are two contenders, two pretenders, and two sleepers.

Tampa Bay’s line of Nikita Kucherov, Tyler Johnson and Ondrej Palat is the best forward trio in hockey. Together, the line has played 644:27 minutes at even strength and controlled 57.3 percent of shot attempts, per puckalytics.com. That is insane! Johnson’s line — which ranks first among NHL line production scored at even strength by a margin of 13 goals, per leftwinglock.com — is a key component of a powerhouse team that bulldozes opponents at 5-on-5.

The possession metrics, puck-handling, and passing for the Lightning are elite, and coach Jon Cooper has the luxury of staggering superstar Steven Stamkos and high-end playmaker Valtteri Filppula on different lines if he so chooses.

Statistics site war-on-ice.com uses hexagonal bin plots to map teams’ shot-location rates by x-y coordinates relative to the net (explained here). The visualizations, which are called Hextally charts, show how well teams generate shots from high-probability scoring areas — usually contained within an area in front of the net that’s roughly the shape of home plate — or prevent opponents from doing so. Take a look at the Bolts’ Team Hextally chart. The shot rates are tomato red because they accrue tons of shots in the home-plate area relative to the league average. It’s no surprise Tampa Bay led the league with 262 goals. 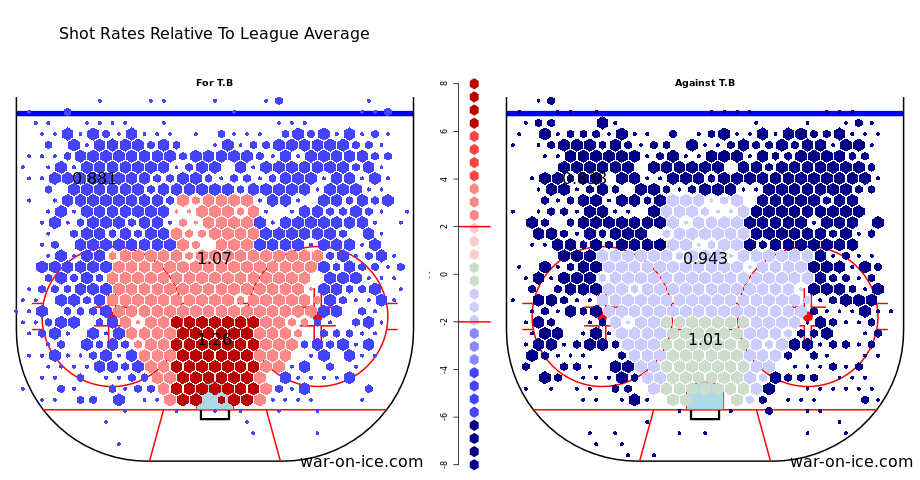 The composition of Tampa Bay’s roster enables fast and aggressive play on offense and defense. Depth wins in the playoffs and the Lightning’s overall roster strength gives this team an excellent chance to represent the Eastern Conference in the Cup final.

The Blues are primed for a long playoff run because their forward and defensive groups are a strong mix of unapologetic north-south power skaters and dynamic quick-strike players. The roster is teeming with skill, and the sole worry for St. Louis is the play of goaltenders Brian Elliott and Jake Allen.

Even though space is harder to come by in the playoffs, the clip below is worth highlighting because there will be fleeting windows of opportunity. Postseason fortune favors the bold, and here the Blues exploit the Capitals’ vulnerability.

A long stretch pass by Jay Bouwmeester to Alexander Steen becomes available through the middle of the ice because the Capitals are changing lines and, because it is the second period, it is the long change. Steen gains the zone, drop passes to Vladimir Tarasenko, and drives the middle. Tarasenko zips it across to T.J. Oshie, who passes it diagonally to Steen. Steen goes forehand-to-backhand, and by doing so causes a rebound off the far pad. Steen proceeds to slam home the second-chance opportunity.

The Blues have the right collection of players to win the board battles and races for the puck. They can cycle continuously or pounce off the rush. With the Kings dead and the Blackhawks wobbly, the Blues’ best chance to win a Cup is this season.

There is a win-or-else mandate from the Ducks’ management. Franchise cornerstones Ryan Getzlaf and Corey Perry turn 30 in May, and Ryan Kesler is already 30. History shows that when forwards leave their 20s, the decline can be drastic from their peak performance years.

The Ducks want to play a physical, heavy forechecking game and pound their opponents below the circles. But the Ducks’ breakout and how they traverse the neutral zone are serious concerns. Take a look at this clip from the Rangers-Ducks game in March.

Defenseman Sami Vatanen misses center Kesler with a pass, which results in a turnover in the neutral zone. Rangers defenseman Keith Yandle makes a diagonal pass to the weak side, where Kevin Hayes has room and time because Anaheim’s forward on the off side is experiencing a line change. Hayes skates forward to the faceoff dot before Clayton Stoner confronts him. Hayes stops, spins around, and flings a shot on goal that finds the back of the net. While the puck deflected off net-front traffic before reaching and passing through goaltender Frederik Andersen, the Ducks’ bad puck luck was self-inflicted.

Anaheim’s zone exits and transition game have been sloppy all season, placing extreme pressure on a suspect defensive group that struggles with gap control. Unless the Ducks can connect on more direct passes in the defensive and neutral zones, this flaw has the potential to prematurely end their Cup dreams.

The Canadiens’ record suggests that they are a serious Cup contender. But their success has been a byproduct of how exceptionally well their stars have performed this season. Carey Price is having one of the greatest seasons ever for an NHL goaltender and will win both the Hart Trophy and Vezina Trophy. Max Pacioretty has been on the precipice of 40 goals for two consecutive seasons, and P.K. Subban is a former Norris Trophy winner and electric talent.

But aside from exceptional work from those three, the rest of the forwards and defensemen are closer to garden-variety role players, and this is reflected in the statistics. Montreal is 20th in goals per game, 21st in shots against, and 25th in shots per game. The Canadiens are a subpar possession team that relies too heavily on counterattacks and a nonpareil goaltender to snatch victory from the jaws of defeat.

Much like the Blues, the Capitals’ strength is their versatility. They pride themselves on getting their hands dirty and scoring with the forecheck. If an opponent places too many skaters beneath the dots, the defense can burn them with their heavy shots.

Washington also has a plethora of capable puck-handlers who can carry the puck with speed through the neutral zone and attack off the rush. This allows coach Barry Trotz to achieve more balance by sometimes using Evgeny Kuznetsov as a playmaker for Alexander Ovechkin — still the NHL’s most redoubtable sniper — instead of relying on Nicklas Backstrom or Marcus Johansson.

The Capitals’ puck management has improved under their new bench boss. Trotz has installed more structure and defense, and the Caps have dramatically improved in the noteworthy possession metrics. There is more accountability from the forwards, and offseason additions at defense have helped Washington field a blue line without any replacement-level defensemen.

The Winnipeg Jets are a difficult team to play against because they are gigantic, quick, and skilled. And with the return of Dustin Byfuglien, the team’s unsparing security apparatus, they will become even more challenging. Under coach Paul Maurice, the Jets’ improvement on defense has been conspicuous, and they have the fifth-best shot attempts against per 60 minutes at even strength (CA60) of any team in the NHL, per war-on-ice.com. A look at their Hextally chart reveals that accumulating shots against the Jets on 5 on 5 is a brutal task. 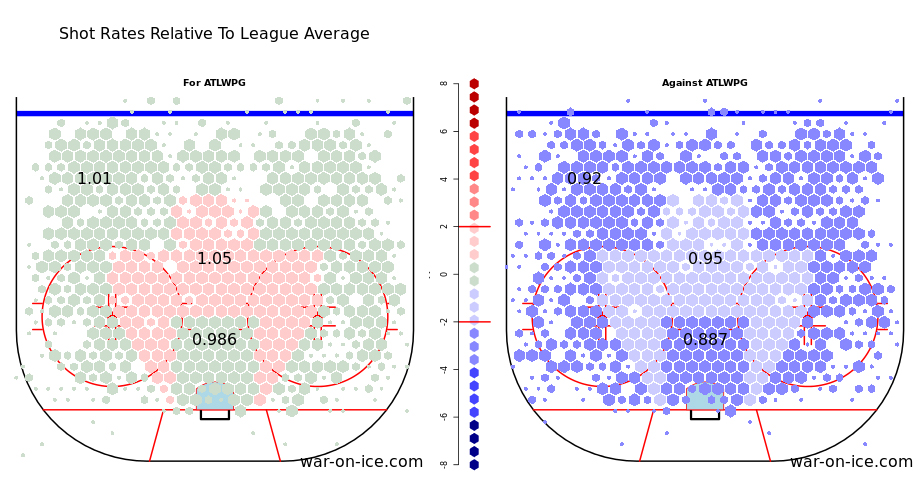 However, what makes the Jets most intriguing as a sleeper is their side of the bracket. They will play the Ducks in the first round and, even though they are 0-3 against them this season, there are reasons to like the matchup for Winnipeg.

The Jets can match the Ducks’ size and physicality, and both teams’ goaltenders are question marks. The Ducks own the two best players in the series (Getzlaf and Perry), but the Jets’ depth is better and they have stronger metrics. It is conceivable that, if the Jets upset the Ducks, they could then win a soft second-round matchup against the Flames or the Canucks, and shockingly thrust themselves into the conference finals.